I’d seen this trend of doing yoga on a surf board via Instagram but thought it was one of those ‘only in LA’ sort of things. So when Gymbox got in touch to tell me they offered it at their Farringdon branch I of course jumped at the chance of going down.

So if you haven’t heard of it before, yes it’s actually done on a surfboard, but in a gym. The boards are attached to boxes which make them a little unsteady, but it’s great for giving it a real effect – like you’re in the water! So to begin with it takes you a while to steady yourself on the board and you have to evenly distribute your weight in case you fall off – which in my case I did!

We started with a few stretches on the board and then went into the downward dog position, where the first wobble came. The instructor was very good at coming round and giving us advice on how to stay on the board though, which is something we all needed.

To be honest with you it’s just like your normal yoga class, just with the

added terror of falling off mid pose. So after the warm up came some deep lunges and as my legs wobbled from being in the pose so did my board. We then went on to do some sun salutation sequences – slowly at first to get used to them, but she then started to pick up speed, which is where my fall came – there are only so many things you can think about mid pose.

The rest of the class was pretty much the same – wobbles from my arms and legs, along with wobbles from the board – but I was determined not to fall off  again!!

Towards the end of the class she said we’d be attempting head stands. I can’t even do a headstand on the floor let alone a wobbly board! So I opted out, but some yogi masters impressed us all by actually doing it! I bow down to them.

I loved the fun element 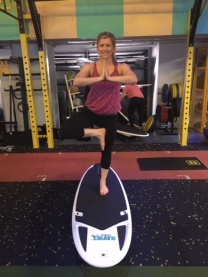 to it, we pretty much all giggled our way through the class, especially when one of us fell off. So a very alternative way to do yoga and great for those who want to practice their balancing.

If you fancy trying out a bit of surfing and yoga in London – Surf set yoga is available at Gymbox in Farringdon.